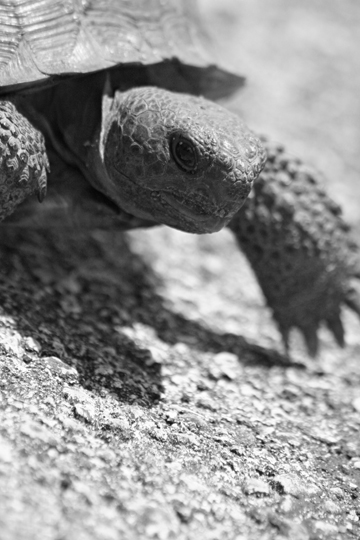 Ever feel slow…I mean really slow, like no matter how hard you try you just can’t move fast enough?

I know I do. All the time. So much to do, I can push, pull, force and frantically move, and I still can’t seem to get what I wanted done in the amount of time I wanted it done in. Often times the lack of ability to, speed up, get the job done, move quicker, has made me feel like I have failed in some way. Then there is the Tortes.

Most people remember hearing the story of the tortes and the hair when they were children. The hair was quick as quick could be, and left the poor tortes in the dust, but in the end, the meek, the mild, the slow, the steady one, is the one who crossed the finish line first. Much to the hair’s chagrin, his lowly friend bested him with the tenacity only a turtle could have.

I met a tortes one day, moving slowly along, crossing an empty parking lot. He had a goal, a purpose, and a destination. It didn’t matter that he was slow, all that mattered was that he kept moving. And, though I didn’t have the time to watch the entire adventure take place, I am sure that he reached his destination, because he wouldn’t stop. Not even for a crazy girl with a camera in his face. He just kept on moving.

Next time I feel like I am moving at turtle speed, I am going to think of that tortes, and remember as long as I keep going, have my goal in mind, and stop worrying about the when, I will reach my destination.

But those who hope in the LORD will renew their strength. They will soar on wings like eagles; they will run and not grow weary, they will walk and not be faint.